Simple means we haven't created something that runs us. Too many business owners are working too much, wear too many hats, and lack the clarity and confidence that they are working on the right thing at any given time. We strive for a simple business model that gives us the freedom to do anything and live anywhere.

Profitable means we are actually bringing in enough money to support our lifestyle. We're not simply chasing vanity metrics like revenue.

Impactful means we can see a direct impact of our work because of the feedback we get from our students. At many jobs it's hard to see the impact of the work you do. If you weren't there would the world be any different? By creating transformation-based courses that actually sell and that students actually complete, we are making a direct positive impact on the lives of others. And that feels good!

How we got here

Have you ever felt like your fate was decided in advance?

Everything in my life pointed me towards one career, ever since I was in the first grade. A talent for math, a teacher who told me I should be an engineer… it just seemed like a natural choice. Actually, it didn’t even seem like I had a choice. So right until my senior year of college, life as an engineer was where I was headed.

If engineering was the obvious path for me, being a business owner was exactly the opposite. I thought that entrepreneurship meant having a brick and mortar presence, hiring lots of employees, finding venture capital and taking out loans. That had ZERO appeal to me.

But then a book changed my life.

I picked it up in 2008, right as I was about to graduate as an electrical engineer. The title, The Four-Hour Workweek, shocked me with its audacity to imagine a completely different life. The ideas inside about automation and outsourcing made me rethink what entrepreneurship could be like. Heck, it made me completely rethink what work could be like!

The seeds were planted for a complete paradigm shift.

So while I spent the next eight years working as an engineer at a traditional 9-5 job and starting a family, that mindset shift had already begun. I was willing to consider a much less traditional path for my future.

I started six different side hustles. Six. Why so many? Well the first one failed, then the second, then the third… you get the picture.

Each one was a failure, but each one taught me valuable lessons along the way.

I didn’t make a dime in those early years, not on blogging or creating physical products or working on apps. Good thing I hadn’t quit my day job! But the drive to keep trying was still there. And I learned so much about myself and what I like doing.

Yes to making videos, no to writing. Yes to putting together logical systems, a BIG no to the headache of prototypes and packaging.

One day after a stressful shift at work, I came home and decided to blow off some steam by playing piano. To be honest, I was procrastinating. I’d rather have played piano than work on my latest side project. And then it hit me.

Piano could be the project.

I could teach piano online.

See, years of childhood piano lessons had left me bored to tears and pretty unaccomplished. It took a chance encounter at a youth camp to find a better way to play piano, to actually enjoy it. What I learned had completely transformed how I played. It went from being a chore to being something I wanted to do.

I could teach that to others. I could help transform people who hated or didn’t understand piano into people who enjoyed it and could actually play songs they love.

Okay, cool idea Jacques. What next?

As an engineer, I am very analytical. That means that breaking down my piano knowledge into a system or program made complete sense to me. Traditional lessons had never resonated for me, yet I could take what I had learned since then and make it accessible and logical for others as an online course.

I reverse-engineered what I knew and figured out how to present it so it could make sense even to a complete beginner. It might have taken me six failed ventures to get to this point, but once I got there, I was convinced this was going to work.

By then it was 2013, and it was still pretty rough out there in the online course world. The tools and resources that are available now just didn’t exist.

There were so many roadblocks.

But there were also some podcasts and blogs that gave me hope. In particular, I remember hearing about a course creator who sold 100 copies of his online piano course right after launch. That really sealed the deal for me. I was committed to making this work.

But it’s one thing to create a course, and another thing to find people who want to buy it. I learned that the hard way.

See, I had really been assuming that “build it and they would come” would work for my online course business. I heard success stories and assumed they were common. I heard about crazy launch sales numbers and thought that they were normal.

That first day after my course went live? Crickets. Not a single sale. Zero, zip, nada. I was frustrated and honestly kind of scared.

Instead of a big launch week, I started to get a steady trickle of sales that built up over months, not days or weeks. It was painfully slow going at first, but I eventually found my audience. And more importantly:

I figured out what I needed to say to my audience. How to really reach them.

YouTube became a big driver for early traffic and sales, and still is to this day. I made some short but high-value videos that really helped people. Giving them real, bite-sized solutions built trust and made them want more.

When I started learning about email lists, squeeze pages, and marketing techniques from other entrepreneurs, things started to change. I was eventually able to craft a funnel that brought in consistent sales and turned this from a side hustle to a source of real income for my family. But there were still some challenging moments before I got to that point.

In December of 2015, after careful planning and saving, I quit my engineering job to focus full-time on my piano course. At the time, I was earning just over $1,000/month: not enough to support my growing family but enough to give me hope that it was possible.

Eight or nine months after quitting my job, I was still at that $1,000/month mark. My daughter came into the living room with a new book one day. She sat in my lap as I started reading it to her, and the title was Little Miss Big Sis. The book's all about being a big sister. I looked at my wife and started tearing up.

"Are you seriously pregnant? And this is how you're telling me?"

We were officially pregnant with our second kid, which was very much a surprise (although a very welcome one)! That’s when everything started feeling like a lot of pressure. I started looking for “real” jobs again.

But as fate would have it, soon after that amazing announcement, things started shifting in my business. I was making some changes, and implementing them had a big effect. Perfect timing!

The biggest change I had been working on? Implementing an evergreen funnel. Learning from others in the online course world, I discovered that setting up a funnel with a specific type of launch sequence and marketing made a huge difference in sales. In a matter of months, monthly revenue went from $1,000 to over $20,000. Consistently.

My business grew by 10x and has been consistently profitable ever since. I remember telling my wife, "Babe, this is working. This is finally working. Four years of struggle, it's working." What a relief!

But... I also found myself working constantly.

Lots of sales meant lots of customer support, more demand for content and video production, and all the behind-the-scenes work needed to keep the business running smoothly. I was running myself into the ground trying to get everything done.

Automation and outsourcing turned all that around. I began hiring a team and delegating responsibility so that I didn’t have to spend all day every day at my desk. By the end of 2017, profits were good AND I had outsourced enough to work about 6-8 hours per week (a fraction of what I had been doing before). For the first time, I could really ask myself:

“What do I want to be doing with my life?”

For my family, this steady income and extra free time meant we got to spend so much more quality time together. We had our dream vacation in France (and other amazing trips since then).

The game had changed. Things would keep running in my business even if I wasn’t physically in my office.

And I’d discovered a new passion not just for teaching piano, but for online courses themselves. I had struggled so long to make mine a success, but now I wanted to help other people get past those hurdles so that their own online courses could thrive.

So I started a podcast.

It’s evolved so much along the way, but at its heart it’s always been about helping people figure out what works and how to build a successful online business. I’ve done tons of interviews with industry experts, creators, and people who like me have gone from zero to successful courses that support their families. It’s been an amazing way to connect with others in this community and grow it even more!

Whether I’m recording a podcast episode, coaching a new course creator, or tinkering with my own online piano course, I’m constantly motivated to keep learning and keep helping others learn.

Or maybe you’re something in between all those things. You’re in the right place, because I’ve been in your shoes no matter what level your business is at. I started from the ground up with a real online course (NOT one about selling online courses!).

I know what it feels like to wonder if any of this is worth it. And I’m here to tell you that you CAN have a successful and flourishing online course business. It takes work, but you can make this work. 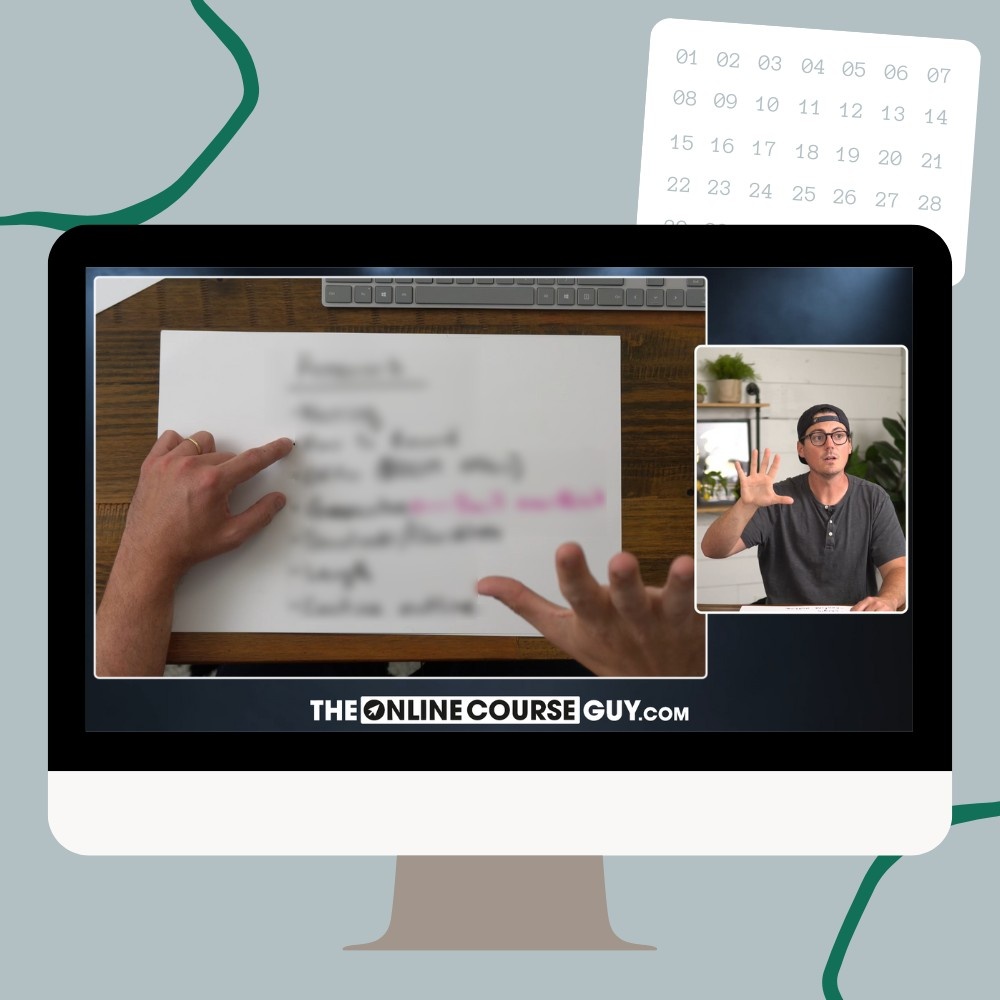 Learn the exact formula 6 & 7-figure course businesses are built with so you can focus your time on the right things and get on the fast track to your dream online course business.

Enter your details below to join the challenge.